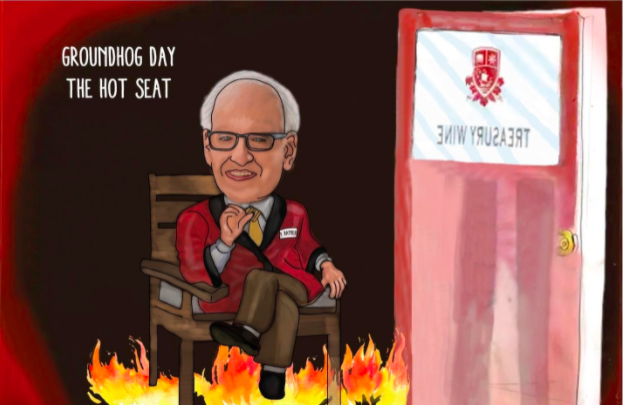 The Oxford English Dictionary’s official definition of Groundhog Day is “a situation in which a series of unwelcome or tedious events appear to be recurring in exactly the same way.”  And so it goes for the longtime reign of Paul Rayner, the Chairman of Treasury Wine Estates (TWE).

Before going through the specific performance of Rayner, let us first summarize the general role of the Chairman of the Board for a publicly listed Australian Stock Exchange (ASX) company.

The Chairman of the Board’s primary role is twofold – (1) Choose the right CEO, and (2) Professionally manage the governance of the company (make sure unexpected crises do not occur which could ultimately hurt the reputation, performance and share price of the company).

The average tenure of an ASX company Chairman is a little over five years.  It is generally accepted knowledge and practice that when a company is governed very well, and performance is steady and/or improving, a Chairman could stay on for a maximum of 6-8 years.   In Rayner’s case, neither has been the case.

Rayner has been Chairman of TWE for over 9 years – and his tenure has experienced three significant eras of up and down, less than steady performance.  Let us look at the time periods in more detail and make sure we keep a practical, accurate score as we go.

Let’s start at the beginning.  Paul Rayner became Chairman of the Board for TWE in 2012.  He has been part of the Board since it was spun off as a separately traded company from the Foster’s Group in 2011.

The first major crisis for the new TWE publicly traded entity hit in September 2013 when TWE had an inventory and other items write-down of $160 million (which was almost equal to the company’s annual total EBIT (Earnings Before Interest and Taxes)).

The CEO at the time, David Dearie, was ousted “with immediate effect”.

There were two serious problems with this time period for the company.  Firstly, the sheer amounts of the inventory write-offs were massive.  Anyone who has researched, invested in, or operated within FMCG companies knows that inventory is one of the most important part of the business that needs to be tracked and managed very carefully.  Rayner would know this very well in his past life as a financial executive and his governance training.  The level of mismanagement on this part of the balance sheet for TWE was huge and inexplicable.

Secondly, there was never any alignment between Rayner (the Chairman) and Dearie (the CEO), and this spilled out into the business press.  When TWE decided to part ways with Dearie after a relatively short period of time, there was complete mayhem in the Australian press (“Dearie’s parting shot at Treasury”).

On a continuation note, David Dearie is now CEO of Chateau Ste. Michelle, a very large premium wine Company based in the United States – so he cannot be all that bad.

Not a great start to one of the longest tenures for a Chairman on the ASX.

The Michael Clarke era, the rise, unprecedented management exodus and fall, the Ghost in the Machine

The Michael Clarke CEO era for TWE started in 2014 and significant share-owner value was created over the first several years of his tenure.  From March 2014 until August 2018, Treasury Wine Estates stock price went from $4 Australian to $20 Australian, or a total market capitalization increase of a little over $2 Billion US$ to over $10 Billion US$.

Clarke was a South African-born executive who was known as a hard charging, micro-managing, win-lose type of manager.  While profits and the share price increased dramatically, government regulators, suppliers, distribution partners and employees felt uneasy.  Targets were driven ever higher at all costs and anyone who did not buy into or agree with the Michael Clarke way of doing things was eventually sidelined or removed from the business.

The EBITs of the Company tripled, driven by a massive increase in China and Asia profits.  Estimates derived from TWE’s 2014-2019 publicly available financial statements show China annual operating profits growing from a negative amount to over $200 million.  Asia became a whopping 50% of the company’s EBITs, up from 15% over the five-year period.  Clarke had a good formula and team (along with a massive compensation package), and the Board and Rayner were happy.

From there, Clarke’s controlling management style went into ever higher gear which resulted in turmoil and chaos, as well as rapidly falling results.  There were detailed summaries in the Australian and American business press of his hard driving management style and an almost world-record setting management exodus from the Company.

There was also a steady stream of legal letters and threats of clawing back already vested equity shares that went to many employees that left or were pushed out of TWE.  This is very nasty stuff for a publicly listed wine company.  It actually looks more like a playbook for government versus government espionage.

The stock dropped by more than half, and Clarke disappeared after announcing an early departure at the same time that COVID and significant Chinese tariffs on Australian wine kicked in.

Rayner was there, but we did not hear from him.  The real issue here is that when a CEO acts poorly towards current and past employees for such a long period of time, there is usually someone who is empowering him/her to do so.

Ultimately, given the number of people affected and the negative effects on the company’s reputation and long-term performance, this is inexcusable.  A Chairman should never allow their CEO to aggressively treat their current and past employees poorly.  It is not a formula for success in the long term and ultimately affects the reputation and performance of the company.

At the same time, because of the massive level of turnover in the company before Clarke officially left in June 2020, there was a huge deft of talent that remained.  The people who were left behind became the future leaders of an overvalued company with a significant set of new challenges.

The company did not add any notable new talent to replace all the management who had helped to increase the value of the company during the early part of Clarke’s tenure.  This future state of the company has been referred to as the “Ghost in the Machine”, holding TWE back from significant potential progress going forward.

Michael Clarke era tenure scorecard – Rayner 1-1 (value creation win, treatment of employees and state of the company at end of the era – lose).

As the post Michael Clarke era began, the Company announced “significant new strategic initiatives”.  These included three main strategies.  First, re-allocate Penfolds branded products from China to Southeast Asia, Australia, Europe and the US.  Second, split the company’s internal operations into two divisions – Penfolds and all other.  And third, drive a new TWE cultural DNA, which means bringing your full self to work every day.

While these three strategies sound good and logical in theory, they need to be evaluated in the context of a global FMCG company trying to maintain a significant growth story in the future.  And there is one big, practical flaw when taken all together – these strategies are inward looking for TWE, versus outward looking on selling and marketing good wine products to the consumer.

When companies run into trouble and see their external path to growth ridden with risks and challenges, they turn inward.  It is very worrisome, as these types of cultural shifts create their own self-creating momentum and can last for long periods of time.  That leads to a pattern of under-performance, crises, and reactive internal restructurings with resultant grasps at new strategies.

The re-allocation of Penfolds from China to other markets is difficult and will take time.  An estimated 60% of the Penfold’s brand global EBITs came from China before the tariff increases on Australian wine.  Moving this product to other markets at similar margins is a gargantuan task (See below).

The split of TWE’s internal organization into two operating divisions will no doubt cause confusion with employees and customers (internal and external rumblings are already happening).  The wine business is fragmented and complex enough as a consumer category.  Increasing complexity into this market through internal organizational duplication is the last thing a customer would want deal with.

And the creation of a new TWE cultural DNA program will not resonate with employees or hold any substance without marketplace and financial results.

These plans, taken together, are not inspiring and will not lead to increased growth for the company in the future.

But the biggest issue that TWE faces in the short and medium term are questions about the quality of their earnings in F21 and going into F22.  The company’s year-end FY21 results looked good on the surface, as a surge in 19 Crimes sales mixed with a “better than planned, successful” re-allocation of large amounts of Penfolds to markets outside of China seemed to work well (this took TWE back to a flat earnings result versus prior year F20).  But you need to really look into the detail of the earnings results to understand what might be happening.

Firstly, the 19 Crimes results are primarily driven by the U.S. market where pricing for this brand has steadily declined over time and now is regularly below $10 US at retail.  Anyone who is familiar with the US market knows that once a brand’s price falls below $10, it never goes back up.  It can be a race to the bottom, which seems to be the case for 19 Crimes as it strives for more volume growth than price stability.

Even more worrisome is the somewhat miraculous reallocation of Penfolds from China to Southeast Asia in the second half of FY21.  Remember that TWE is trying to reallocate annually $200 Million A$ worth of EBITS on Penfolds from China (pre-tariff) to primarily Southeast Asia (with a portion to other markets).  Half of this seems to have happened without a hitch in H2 F21, at China elevated price levels, during the same time period which had severe COVID lockdowns in Southeast Asia.

That raises some questions about where the product is going and what are the current inventories in the market (is it sustainable and can another half year be completed with similar ease?).  Discussions with several distributors in Hong Kong and Singapore provide some information, but no clear answers.

Two things come through – inventories are high and a significant percentage of the reallocated Penfolds volume is moving through “traders”, not through the normal distributors within each market.  These “trader” distributors are notorious for moving Penfolds product into Southern China in a manner that side-steps tariffs.  We do not know if this is happening, but if it is it will not be sustainable and is a compliance issue (China takes its tariffs seriously).

For transparency and quality of earnings reasons, TWE should detail out its end markets and customers for this massive reallocation of Penfolds exercise over H2 F21 and H1 F22.  It is too much inventory and money moving around too fast to be seen as “normal business”.  If any significant portion of this reallocation is non-sustainable or pushing the boundaries of compliance, the stock will drop below $10 again on the Australian share market.

Seriously – this is starting to feel like Groundhog Day (“a situation in which a series of unwelcome or tedious events appear to be recurring in exactly the same way”).