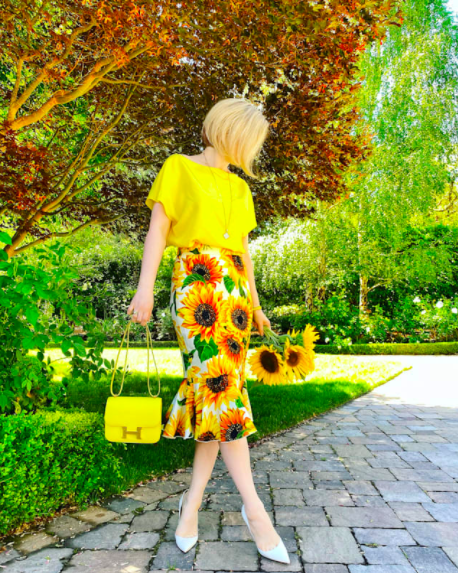 Lena is one of the most mysterious Instagram fashion influencers around today. She boasts a massive following of over four million followers, yet nobody online knows what she looks like due to her always artfully covering her face. Who is this mega-influencer, and how did she become so popular? This is something we will explore a little deeper, so you can find out about this ray of sunshine in the IG fashion universe.

Lena wasn’t always into fashion. Throughout most of her childhood, she was actually a tomboy and loved doing things like digging up worms and fishing with them. She was also an avid gymnast when she was a young girl living in the Ukraine. She also played volleyball for a number of years when she was younger.

Life in the USSR was challenging for her in some ways. When it came to fashion, she had no idea what she was missing out on until she arrived in the United States back in 1996. It was there that she became floored with the massive collection of things like shoes that was possible. Her first pair of shoes was a pair by Steve Madden that her mother, who was already living in the US for a few years, owned. From there, let’s just say her love affair with shoes escalated.

Pretty soon, she was looking to fashion as a way to express herself. It was something new for her, especially considering how ‘fashion’ was practically non-existent in her home country. It wasn’t long before she started amassing a stunning collection of outfits, handbags, and high heels.

Her assistant, Allison, at one point suggested she create an Instagram page. She had no idea what she would post, but once she was seeing other people sharing photos of their shoes, Lena figured she could do that as well. Things escalated from there, and before you know it, she gained a fanbase that couldn’t wait to see the next bold and colorful outfit she put together.

Today, Lena describes her fashion as classic with some funky twists. Sure enough, head over to her Instagram page @Panthere_instyle and you can see that on full display. Lena is known for her cheerful color hues, as well as stunning outfits that match her bags and high heels.

Audrey Hepburn has always been an inspiration to her when it comes to style. However, overall it’s about being classy and fun at the same time. Lena has a unique style that isn’t captured by anyone else on Instagram right now, making her one-of-a-kind.

As great as her fashion sense is, she likes to share that her biggest passion in life is healthy living. She has been battling a chronic illness for around a decade now. This has led her to increasingly use her massive platform on Instagram to talk about healthy habits, especially how to eat well, since she knows firsthand how big of a difference it can make.

Be sure to follow Lena on Instagram and enjoy a daily dose of positivity and cheerful fashion.