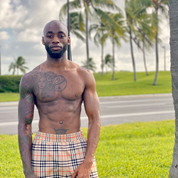 King Nasir is an entrepreneur who has built a massive brand in the adult industry. As he’s been name for himself there, he’s now decided to add on to his list of ventures and become a recording artist. Just recently, he released back-to-back singles which have solidified this new plan.

Moving into a new industry won’t be hard for King Nasir as he’s already been a part of so many. Besides the adult entertainment industry, King Nasir has also successfully built his own clothing line all on his own. With the music, King Nasir has already been doing it himself as he does all of his own producing, writing, and engineering. Fully creating the process, he will be able to give his new fans exactly what he wants to hear.

When new artists begin in the music industry, they often don’t know where to start. King Nasir on the other hand has experience starting new ventures and has proven he will be able to compete as an artist. With two back-to-back singles under his belt, King Nasir is well on his way to breaking into the music scene.