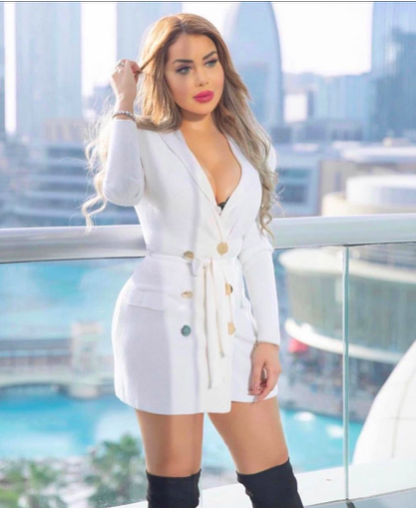 As an elite entrepreneur and popular model, Santa has dominated the social media industry with her astonishing looks and innovative trends

The world of social media is a very lucrative place for numerous models and brands. Few know this as well as social media star Meli Santa, who has taken full advantage of her Instagram to build a large fanbase and effectively monetize her platform. Even in an industry as over-saturated as social media, Santa has found multiple ways to differentiate herself and is widely recognized for her unique looks and desirable figure; however, there is far more to Meli Santa than what meets the eye.

Santa originally hails from Tehran, the Capital of Iran. She is known throughout the industry for her petite frame, glistening black hair, and her stunning facial features which showcase her distinct Middle Eastern traits. It’s through her distinct looks, creative content, and charming personality that Santa has accumulated an immense following of nearly half a million followers on Instagram alone. Her social media growth shows no signs of slowing down anytime soon, as her consistency has scaled her brand at a record speed in 2020. She plans to make 2021 her best year to date and has many big plans and collaborations in store.

Meli began her social media career in 2016 when she was heavily involved as a cosplay model. Although she has switched her modeling style to glamour since her cosplay days, she is known for innovating trends in the cosplay world. Meli has now shifted her focus to fashion and glamour modeling where she seeks to make a substantial impact. So far, she’s made quite the splash, as she is one of the premier models in the Middle East. She often works with prestigious and desirable brands and can be found posing in a variety of outfits, from swimwear to some of the most detailed fashion available. She has also collaborated with many top-tier photographers from around the world. She is especially a hot commodity among photographers in Dubai, where she currently resides.

Although she is primarily known for being a model, Santa prides herself on being a businesswoman and successful entrepreneur more than anything. She has built herself to the elite level she finds herself at today all by herself, and often makes business decisions on her own. She has a natural talent for marketing and has many significant business plans for the future. Santa attributes her strong mindset and consistency to her rapid growth and overall success. “This industry is not easy. For one to be successful, they need to be consistent, innovative, and mentally tough. If you are not passionate about your work and don’t show up with a purpose each and every day, there’s a good chance you will not be around for long,” Santa boldly stated.

Santa is also very passionate about giving back and supporting charitable causes she is passionate about. Her online presence has given her the opportunity to shed light on major social issues, and she has personally made many financial contributions to numerous organizations. Most recently, Santa has created fundraisers for organizations such as the CDC Foundation to help fight Covid-19, both in the Middle East and around the world. Her most recent project consists of raising awareness for breast cancer, as she is an avid supporter in the fight against cancer.

Meli Santa is someone aspiring models and entrepreneurs can look up to. She is an exemplary role model to women across the globe, a strategic businesswoman, and an electrifying model who continues to set trends in whatever area of modeling she enters. We would like to congratulate Meli on all of her success thus far, and we can’t wait to see what she does next. She is definitely an entrepreneur to look out for in 2021.