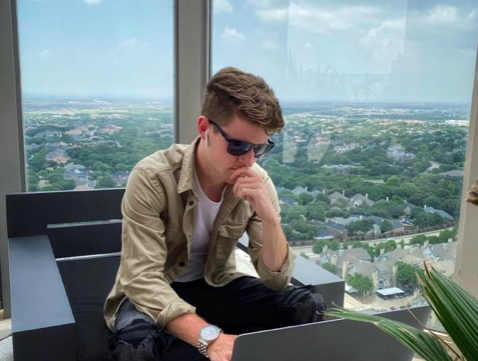 If you’re an aspiring entrepreneur trying to make your way into the world of YouTube would you take advice from a 19-year-old? Probably not, but if his name is Caleb Boxx (@calebboxx) you just might.

Coming from a small town in Missouri, Caleb Boxx realized at a very young age that a traditional college pathway was not for him. Ever since he dropped out of high school, he has been working diligently to grow his YouTube empire, where he helps countless YouTubers grow success and earn passive income by learning and becoming familiar with something called YouTube Automation.

Caleb describes YouTube Automation as a stress-free way to make a desirable income while being able to still have a substantial amount of freedom. Even though he came from a very traditional family, Caleb states that his father was the one who taught him the essentials when it comes to being successful in business ventures, by teaching him the importance of work ethic and the competitive edge of business.

Being a high school dropout didn’t deter Boxx from becoming a self-made entrepreneur. While many people around him tried to express their concerns about his decision, he simply this as motivation and incentive to strive for bigger and bigger goals.

Today, Caleb is a self-educated YouTube guru who has acquired his wealth and success through millionaire mentors in the YouTube and media space. In 2016, Caleb created the YouTube Automation Model that was designed to make the life of YouTubers a little easier. The content is created and managed by a select team of highly valued professional freelancers so that the “CEO” of the channel has less time to worry about the details of each video, and more time to generate ideas and network with other content creators.

How does one make income using YouTube Automation? YouTube Automation gives you a desirable income and lifestyle, without having to actually make videos yourself. The YouTube channel’s creator will hire other freelancers such as video editors, scriptwriters, and narrators to construct a well thought out and create video. The way to get income is via ad revenue, where 1,000 views = XCPM. On Average, CPMs are $4, so that means for every 1,000 views $4 is earned.

With over 3 million subscribers and 400 million views on multiple YouTube channels accumulated, Caleb has the expertise to help growing YouTube successes. One of his clients, Preston, has over 14 million YouTube subscribers and has acquired his stance in the world of social media due to his involvement with the YouTube Automation model.

YouTube is a growing video sharing website that is slowly becoming the biggest platform that offers creators different ways to gain 100% passive income. Just as there are many success stories, there are many people who fail in the YouTube space because of lack of resources.

With the proper training, anyone who has the drive and determination can succeed in the YouTube industry. Caleb Boxx offers free training for people who want to learn more about YouTube Automation and is the #1 in this field. As a YouTube expert himself, Caleb Boxx has built multiple YouTube Channels to over 100,000 subscribers and offers free training where he reveals a business model to help other young entrepreneurs become successful the same he has.