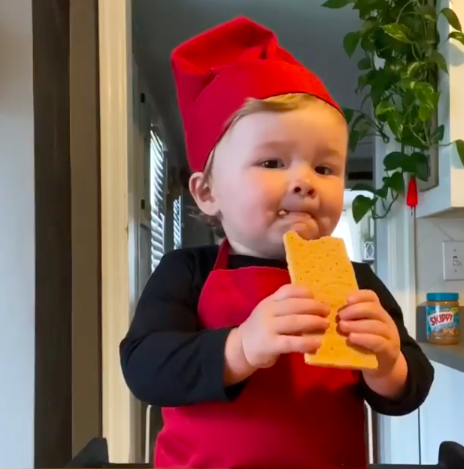 “Chef Kobe” is all of 1 but already has more than a million people from across the world following him. ‘Kobe Eats‘ is an instagram account managed by Kobe’s parents where there are short videos of Kobe helping his parents cook in the kitchen and eat while cooking.

The world is facing a lockdown and its effects can be seen where people have followed the accounts within months of opening. The world is craving to watch short videos featuring Kobe’s antics in the kitchen. Chef Kobe’s bio on Instagram reads – “Chef Kobe” likes “to cook, eat & explore in the kitchen”.

“I made butter chicken and naan with my mom! She helped a lot with this one because there was lots of work to be done on the stove.. I made a few mistakes but that’s okay, it was a lot of fun to make this!!! I especially loved the part where I ate naan. A lot of it. I love naan.”

Lakhs of people liked the video, thousands commented and some even had requests like – “Baby chef can you make some Indonesian recipes for us?” People are sending love and kisses to the baby and saying words like- “I hope he never tastes himself because he is too cute and like a candy.” Some are even employing Famoid’s services to get some great followers in order to make a good impression on Instagram while posting videos.

The videos were being recorded for the family and friends of the couple. But then the couple decided to put it on Instagram by the end of February and till 15th April the account had only 200 followers. The videos got shares and that gave rise to the baby chef’s followers.