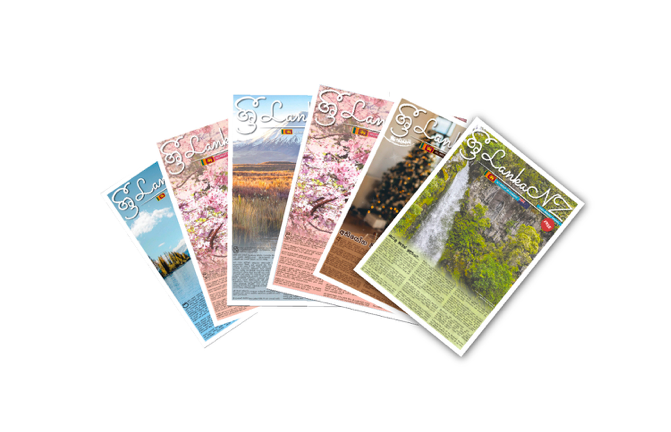 Sri Lanka is a country known for its hospitality and remarkable tourism site. It offers various activities while navigating from a rich cultural heritage, temples, forts, and a relic of Dutch colonization. It is the land of traditions and religions with natural monuments, gardens, national parks, greenery, beaches, and everything covering the exquisiteness of mother nature, delivering a great sight for visitors. The natives who go away from their country face a hard time forgetting those exuberant scenes. Traditional values and festivities are celebrated wholeheartedly in the region. People who travel abroad or have moved to reside permanently in a foreign place miss all this. To fill this void, Harsha Weerakoon and Charith Ekanayake have launched a newspaper for all the Sri Lankans residing in New Zealand – “SrilankaNZ”.

SriLankaNZ is a community newspaper, serving the New Zealand-based Sri Lankan community of over 18,000 people. Its online edition was launched in November 2019 on its website. The printed version was out in the market in March 2020. The founder Harsha Weerakoon and co-founder Charith Ekanayake known as CJ, have worked in all the dimensions to help the readers settle down in a new place and blend within a unique culture. It is available to read for all, and its distribution is free for all. It is the only newspaper available for this community with content in both English and Sinhala. Its name is a combination of Sri Lanka and New Zealand (NZ) abbreviation to represent the Sri Lankans settled in New Zealand. The newspaper is published in English and Sinhala. “ශ්‍රී” is “Sri” in Sinhala, and combination of all ශ්‍රී and Lanka and NZ, it has become the widely accepted logo of this Newspaper.

The newspaper has onboarded K.A.B Karunarathne as an editor preceded by Niranjan Herath. Anu Weerakoon actively participates as the media coordinator and covers all the social sites, including Facebook, Twitter, Instagram, LinkedIn, and YouTube. The printing press, Stuff New Zealand Petone, is based in Wellington. The community newspaper is published in English and Sinhala, the official main language of Sri Lanka. Printed copies of the newspaper are currently distributed to 36 outlets with connections to the Sri Lankan community such as businesses, temples, and restaurants in the following centers: Auckland, Hamilton, Whanganui, Rotorua, Hastings, New Plymouth, Palmerston Hutt Valley, Nelson, Dunedin, and Invercargill among others. The newspaper is available to read on Google Business. The length of the newspaper ranges between 24 to 32 pages, but with increased public demand, highly appreciative readership, and a rapidly increasing contributor, it is focusing on further expanding its volume. Since March 2020, seven issues have been produced at two monthly intervals and 2,500 copies of each distributed to outlets around the country. Sri LankaNZ celebrated its year anniversary by issuing a Special Edition with the 7th issue of the newspaper. The story of this newspaper’s anniversary was featured in a Sri Lankan newspaper, “Sunday Observer,” as well. There was an unmet demand as all outlets ran out of copies. The publishers received immensely positive feedback and many contributions for future editions. Newspapers have been between 24-32 pages in length.

With an aim to promote journalism and blogging, the executives of Srilankanz have partnered with PressPatron. They use crowdfunding to efficiently contribute to the publication of all the literary stuff. Sri LankaNZ have also organised a fundraising event for Sri Lankans to participate. Since it is the only newspaper for the Sri Lankan community in New Zealand, it has unveiled all the possibilities to help non-Kiwis feel comfortable. The event progressed by the screening of “Nobody Knows”, a Sri Lankan movie at four venues around New Zealand including Wellington, Christchurch, Palmerston North and Invercargill.

Delivering the insights for the outsiders

SriLankaNZ accepts submissions from various people, including children, writers, poets, educationists, medical professionals, well-being practitioners, and religious organizations. It also disseminates information from organizations that provide services to the community in New Zealand. It reaches out to readers of all ages and lifestyles with a wide range of articles covering topics related to science, health, and wellness information. It also covers informative sections based on history, politics, and travel guides. Based on the interests of readers, it also provides informative content regarding world news and sports. It is a community newspaper for all age groups. It has a separate kids’ corner to help them get their hearts seen in print. Sri LankaNZ is not only a kind of traditional newspaper with community news and cultural and religious directives, but instead, it goes beyond that. It also showcases talented individuals in the creative arts who provide short stories, poetry, articles, and music.

The SriLankaNZ media provide a national public service benefit allowing the Sri Lankan community to feel connected to their community. It will be particularly helpful in providing information and networks to Sri Lankans who have newly arrived or relocated within New Zealand. It enhances the community’s capability and ability to promote and support their culture and traditional values to show the strength of the community across New Zealand. During COVID-19, a painful for all, Srilankanz supported some migrant workers and international students who had newly arrived in Aotearoa, New Zealand, and were jobless.

The community newspaper focuses on the promotional values of the Sri Lankan community based on the tradition and culture of Sri Lanka so that they do not miss home and the aroma. It has strived hard to create affection and association from a place that the people are undergoing homesickness. It enables the Sri Lankan settlers to retain their cultural identity as an integral section of multicultural Aotearoa. It further helps to disseminate information and ideas among the Sri Lankan community to make a meaningful contribution to the Kiwi way of life. It is a great opportunity for Sri Lankans residing in New Zealand to have a platform to express their heart out in the form of well-crafted ideas and traditional values. It brings home-like feelings away from home.