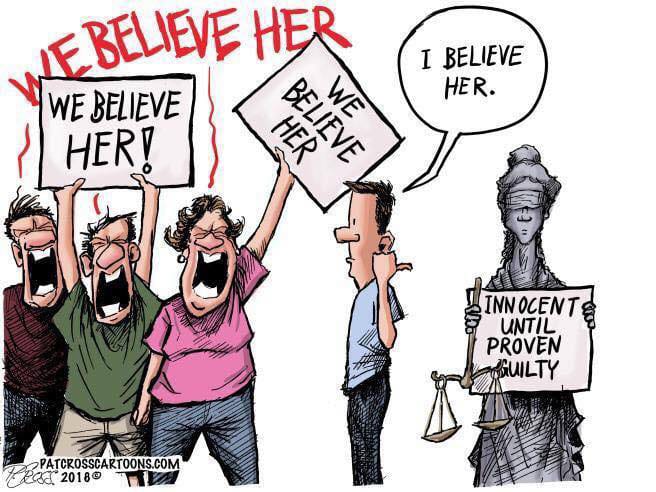 “Proof lies on him who asserts, not on him who denies” was the philosophy handed down by ancient Roman Emperor‘s  stretching far back as emperor Antoninus Pius, who implemented this within the Roman Criminal Law.

English jurist Sir William Blackstone in his seminal work, Commentaries on the Laws of England, published in the 1760 said, “all presumptive evidence of felony should be admitted cautiously, for the law holds that it is better that ten guilty persons escape than that one innocent suffer.”

He was right, because the consequences of a wrongful conviction are heartbreakingly devastating.

It goes without saying, the presumption of innocence is evidently not a new nor foreign concept.  The only distinction is the it appears that the onus shifts where the subject is a public figure. The police and media often publish the names of defendants who have been charged with a crime but who have not yet been convicted.

Perhaps the most machiavellian attack on the presumption in our courtrooms does not even come from rouge prosecutors or the ill informed politicians. It comes from those who would unreasonably see that same standard enforced in our everyday life.

As a New York based Australian lawyer, I was intrigued, but not surprised as to the controversy surrounding the former federal Attorney General. Christian Porter, is no doubt entitled to the presumption of innocence, but whether he has in fact been extended the courtesy remains to be seen.

The presumption only really applies in court. In the public arena from our podcasters, broadcasters, reporters and in turn most of the public who are  fuelled by a voracious appetite for scandal, whether or not it has any truth, continue to harass and embarrass just for the tabloid sales and gossip columns.

Tall blonde prominent poppies with ambition and a touch of pomposity from private schools in Perth pay a very high price in this country for seeking high office, perhaps higher than others. We love tearing down our leaders and sportsmen particularly if they are successful.

Despite New South Wales Police discontinuing their investigation, the facts surrounding Porter’s case have prompted some of the nations most elite lawyers to question whether Porter could in theory still be prosecuted.

Omar Juweinat, a distinguished Australian defence lawyer who has acted in some of the nations most complex and prolific criminal trials said that “a common misunderstanding appears to be that as the complainant is dead, there can be no case to run in the criminal courts, or as lawyers call it, no prima facie case. This is a nonsense. Applying common sense, it would mean that there could be no murder trial as the victim is deceased.” he said.

In this case, where the alleged assault took place in New South Wales, there arguably can be an abundance of evidence that New South Wales Police have not found or their enquiries have been inadequate. A vigilant investigator would turn over every rock and examine every student who visited the debating championship. There is always evidence if there is a will and a creative imagination.

The photographs of the young deceased and Porter, together with the other photographs were taken not too far from the crime scene. Presumably, a highly charged interstate debating contest like this would be attended by most parents and friends based in Sydney. In turn,  there must be an abundance of photographs available to trigger their memories and bring to mind matters that are relevant to the investigation.

One eye-witness can make a case, or indeed break it.

Hypothetically, even if there is no witness, a thorough examination of all the circumstances, including Porters own words at the time of his press conference could assist investigators’ attempts to make a case. Prosecutors seem to have an unfettered discretion as to how they present and prosecute cases.

Highlighting concerns surrounding the legitimacy of prosecution methodology, Mr Juweinat said  “In Australia, many prosecutors have led psychiatric evidence, based on the personality and character of the victim before the sexual abuse and the later lifestyle of drug abuse, alcoholism and mental illness as symptoms and evidence that the abuse took place”.

This is a ‘Catch-22’ for defence lawyers who rely upon the crimes, street offences, prostitution and a wayward life as the proof that the complainants’ words were unreliable. On the other hand, tenacious prosecutors assisted by up- to- date psychiatrists would contend that the tragic outcome is a symptom and therefore some evidence that the complainant’s life was changed by the very crimes alleged.

Under the Evidence Act 1995, such evidence can be admissible and crucial to the outcome. It allows hearsay evidence of the deceased in certain circumstances. According to widely publicised articles, the complainant had kept a diary, always remembered the relevant events, sought counselling on six occasions eight years ago, told a number of people, some of whom more recently wrote anonymously to members of Parliament.

The complainant made allegations to New South Wales Police to which the Commissioner recently said that one of the reasons for discontinuing the investigation was that the complaint disclosed before her death that she no longer wished that the matter proceed. The Commissioner further said it was the policy of his Command which may protect the privacy and some intentions of the complainant.

As in the case of Lindy Chamberlain, everyone has an opinion, based on unrevealed facts and ignorance. By majority, the High Court had found Lindy was guilty which was a low point in jurisprudence in Australia

The High Court confirmed her conviction although their presumption was ludicrous in retrospect. It was only Justices Deane and Murphy who saw the light. Porter is free, presumed innocent in law but presumed guilty or suspicious in the backyards and bars around Australia. There is an ugly streak in the Australian character which did not exist  before Captain Cook arrived.

The reality of it remains, Christian Porter is a private citizen with no greater, or lesser entitlement to the presumption of innocence “There is no reason why the former Attorney General ought not be entitled to the force of the law’s protection and procedural fairness. It would concern me, and should concern the general population if any commission of inquiry was established in this case” said Mr Juweinat. He is concerned that any inquiry commissioned by the government would be “pointless as it could never determine the guilt or innocence of the former minister”.

Perhaps a much more intensive investigation by NSW Police ought to have been deserving and required in order to maintain the public confidence in the system. Lionel Murphy himself stepped down as a Justice of the High Court to allow an investigation to take place. He was later acquitted after two trials and yet a zealous parliament demanded a further investigation. It was not ideal that the Prime Minister and the Attorney General himself had not read the details of the complainants statements.

At least the Prime Minister should re-categorise his attitude to “things we know we know”.